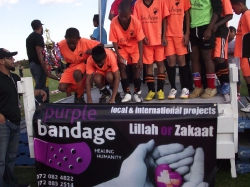 Purple bandage was responsible for the tea stall, and all proceeds were donated back to RFC. The member of Purple bandage sponsored the trophies fromtheir own personal funds.

A special thanks to all those generous donors for the yummy eats. Also PB would like to congratulate RFC on a superbly hosted tournament. You make Roshnee proud!

The winners in the competitve devisions were: