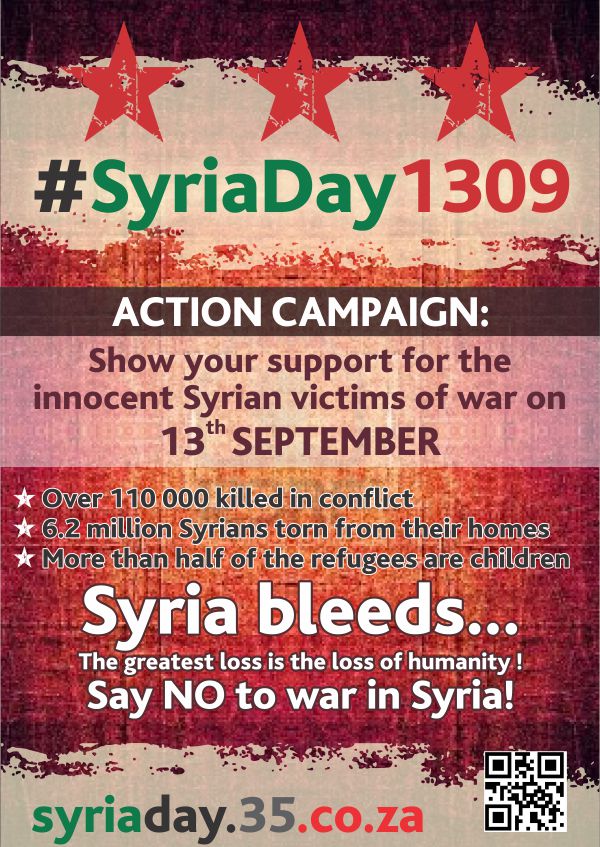 Syria is thousands of miles away. The majority of South Africans have not visited Syria and only a few know its cities and culture.

Yet the plight of the Syrian people was no further than a hear beat away for the residents of Roshnee, a small town situated in Vereeniging.

Fundraising is not new to the people of Roshnee. Perhaps its meaning ‘Light’ aptly captures the spirit of its people. Over the years, Roshnee residents under various NPO organisations have aided many crisis victims nationally and globally. From natural disaster victims to war-torn countries as well as the underprivileged of South Africa – Roshnee’s residents have always rose to the occasion.

The most recent example would be SyriaDay1309 which culminated into a fundraising dinner held at Balmoral Gardens in De Deur.

The project was initiated as a challenge to friends and co-residents when one of the members of the organising committee tagged friends on Facebook and spurred friends on by saying, “Let’s do this, guys!”

And this was the beginning of a successful dinner whose 700 plus tickets sold out within 3 days!

The evening saw a stellar job by the MC – a well-known radio presenter and resident of Roshnee.

The guest speaker was Mufti Ismail Menk – an honourable scholar whose heart rendering words captured the harsh reality of how Syrian people’s lives have been turned into a living nightmare.

Amongst heartfelt moments of solidarity for the humanitarian crisis in Syria, the evening witnessed several guests parting with personal items to be auctioned off to raise funds for Syria.

Other items included a talk by one of the first journalists to enter Syria – Azhar Vadhi.

People were also given a first-hand account by a paramedic who witnessed the state of hardship faced by Syrian refugees.

All in all, it was a most memorable event; especially since all proceeds will be used 2 ease the plight of the Syrian people.

The organisers wish to thank all those present and the community at large for making the event a resounding success.