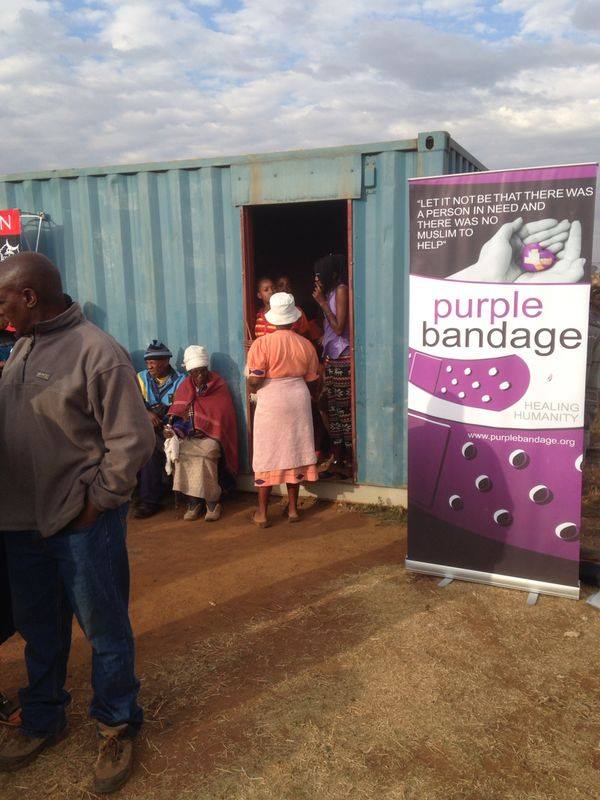 Purple Bandage distributes over a thousand blankets to the impoverished settlements of Sicelo and Sonderwater in the Vaal area.

Monday, 23 June 2014, 11:00 – A cloud of thick smoke arose from the burning tyres as angry residents expressed their outrage at poor service delivery.  This was the scene in Sicelo that greeted onlookers on that fateful morning. The atmosphere was that of tension, the mood that of despondency. Three hours later, an onlooker would never believe that this was the same place. An atmosphere of joy and a mood of celebration greeted the convoy that visited White House Hall at 15:00 that very same afternoon.

A crowd of approximately 480+ residents, mostly over the age of 50, eagerly awaited the arrival of two NPOs – Al-Imdaad Foundation and Purple Bandage – who brought with them desperately needed blankets and a more crucial value – the spirit of ‘Ubuntu’.

For Al-Imdaad Foundation (an international humanitarian group) and Purple Bandage (a Roshnee based Social Upliftment Organisation), Sicelo was an obvious choice. Situated approximately 18km from Roshnee – the residents feel a sense of obligation to their neighbours – neighbourly rights being of paramount importance to Muslims.

After all being given some fruit, residents were treated to positive messages of social responsibility and duty. A spokesperson from our local civic services association took the opportunity to advise residents that positive actions breed positive results.

Sonderwater: Four days later on a Friday afternoon, the same NPOs, together with an enthusiastic support team, visited Sonderwater (near Evaton), where they were greeted by a jubilant crowd of young and old.

As in Sicelo, the various representative speakers echoed the sentiments of social responsibility and reciprocation. When applauded by the crowd, a local Muslim cleric informed the crowd that to share is a moral obligation and that being part of the family of humanity, we each have a duty to each other. He also encouraged those who received that day, to give back to fellow men.

A heart-warming moment in Sonderwater was when the crowd broke into song – roughly translated to mean “Thank you God, you gave us something to think about and pray for”.

Both groups were delighted with the results of the blanket drives and would like to thank all those who sponsored or contributed in any way towards the drives. Together, we have managed not only to warm bodies, but to win and warm hearts as well!