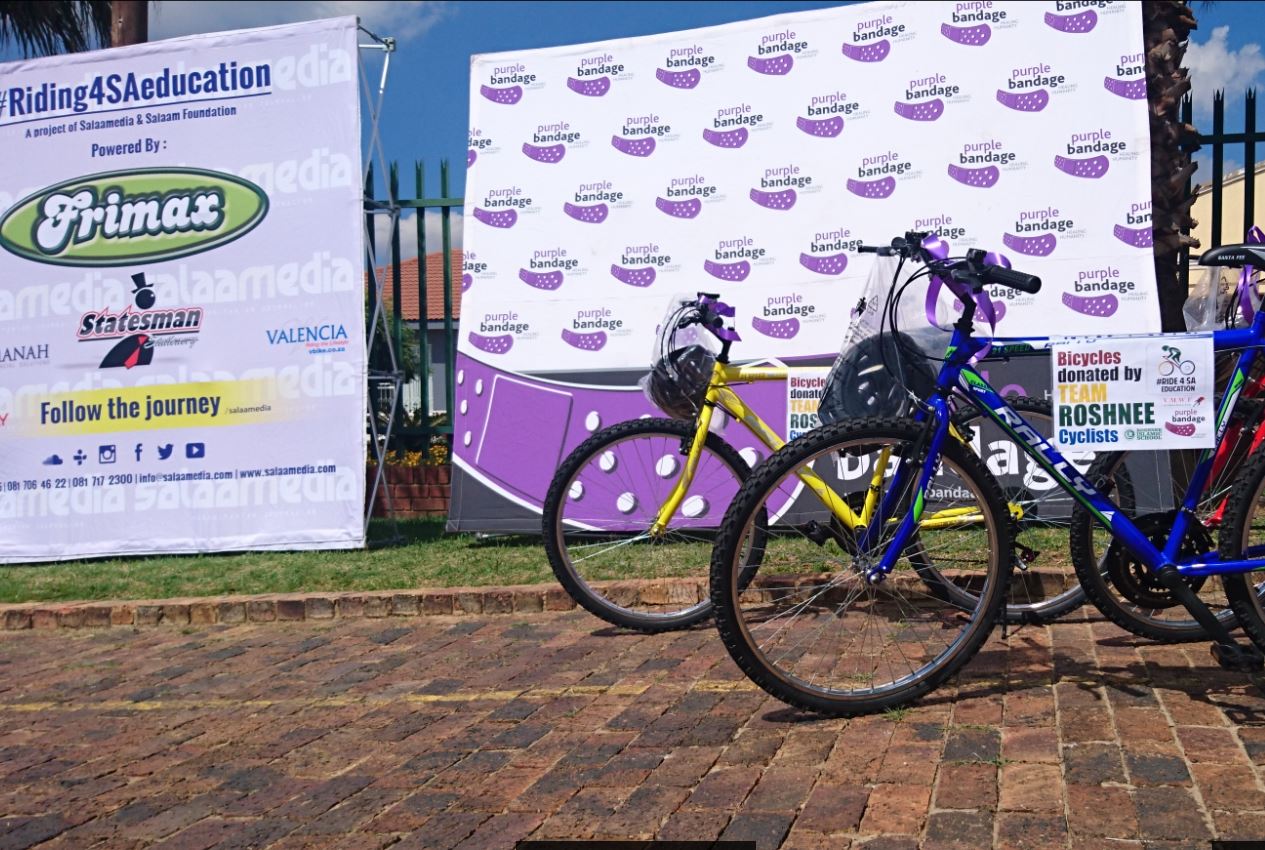 The Purple Bandage team has been a proud host, supporter and partner of the Salaam Foundation and Salaamedia #Riding4SAeducation campaign as it reached the Roshnee leg of its journey.

The Purple Bandage team officially welcomed the riders at the entrance of Roshnee, together with a delegation from the Mayoral commitee, and a number of educational institutions  including iTutor students, and Roshnee residents. The procession then headed towards the Roshnee Islamic School where Purple Bandage along with other groups, including the Roshnee Islamic School, VMWF, and Roshnee Primary School and  held an informative event. The Guest of honour was the Mayor, who pledged his support for the campaign. Purple Bandage is a proud partner of the initiative to donate 9 bicycles, and boxes of libaray books to the campaign. Azhar Vadhi accepted a number of donations from the Roshnee community. The Roshnee event was headed by Miriam Chamda who handed over the books to the  #Riding4SAeducation Team

The campiagn got off to a rolling start from the border town Musina in the Limpopo province. Two cyclists and directors at Salaam Foundation, Azhar Vadi and Zaheer Pahad the first leg of their journey reaching Louis Trichard in just over five hours. They plan to cycle a total of 3000km finally ending at Cape Point in the Western Cape.

The epic ride is aimed at raising awareness around the needs of basic education in South Africa particularly in rural and underdeveloped areas. Along with the awareness campaign they are also calling on donors to support the Salaam Foundation in its quest to implement several education development projects.

“We would like to build toilets in schools without these basic facilities,” said Vadi. “Many schools in rural SA still use pit latrines. We have received requests for simple kitchen structures to assist in preparing food for learners.”

Riding 100 kilometres on average every day has certainly been no easy task. “We are social and recreational riders and by no means

professional. Getting our fitness levels up has been a tough task but we are determined to try our best,” said Pahad.

The route is expected to take the two down the R101 to Johannesburg where Pahad will stop and then Vadi will continue east on the N17. He will branch off at Standerton and head south towards Newcastle, Ladysmith, Pietermaritzburg and Durban. From there it’s the N2 all the way Cape Town.

People will to contribute to the education fund can make a donation to: